Particularly challenging was an approximately 2 km long section, which runs through a protected area with a high groundwater level. For this sensitive project section, the contractor decided to use the so-called "ploughing method" to install the...

For a suburb of Vienna, the water company EVN has renovated the piping system, which has existed since the 1960s. With dimensions of OD 560 mm and 630 mm, the capacity is now more than doubled. AGRU Kunststofftechnik from Austria supplied the 20 km long pressure pipeline made of the stress crack resistant material PE 100-RC.

The new supply line runs from an existing high tank to the west, where it will be integrated into the existing system. The starting signal for this unusual construction project was given in June 2018 with the construction work for the pipe laying. Approx. 198,000 m³ of soil was moved by six excavators, of which approx. 155,000 m³ was humus mining and 43,000 m³ excavation. Twenty people worked permanently on the site. A new pipeline in OD 560 mm SDR 17 and 630 mm SDR 11 with a total length of almost 20 kilometres was installed, which corresponds to a pipe weight of about 1400 tons. The pipes were delivered to the construction site in 20-meter length in order to reduce the number of required welds. In addition to the pipes, around 200 pipe bends and more than 250 electrofusion couplers were used. This way, clean and safe drinking water should be provided for 150,000 people in the district. The total investment volume is approximately € 10,000,000. 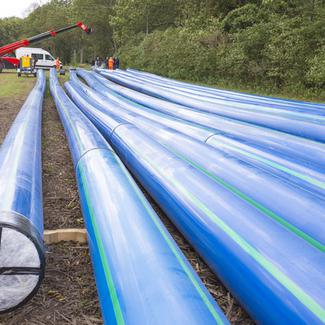 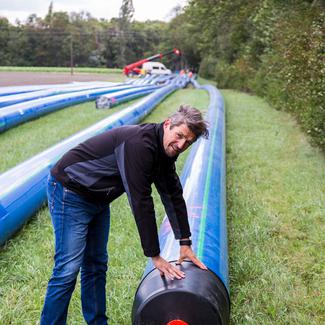 Particularly challenging was an approximately 2 km long section, which runs through a protected area with a high groundwater level. For this sensitive project section, the contractor decided to use the so-called "ploughing method" to install the OD 560 mm SDR 17 pipe. This floor-saving laying technique prevents the compaction of the soil and the mixing of the different sediment layers. Since no pipe trench must be erected and filled again after laying, the speed of the installation also accelerates. The prepared pipe string is introduced into the ground in a single pass, as it is the case with horizontal flush drilling.

For the ploughing method, the pipe string is pulled with the help of a towing vehicle, which is equipped with a support plate and winch. An attached plough has four adjustable booms with hydraulically adjustable rubber wheels and can compensate for uneven terrain. The so-called "ploughshare" is used at the beginning of the line in a starting pit at the height of the laying depth. Due to the pulling force of the cable winch, the ploughshare displaces the soil and possibly existing stones in the area of the line zone. At the same time it smoothes the grave sole through the vertically and horizontally movable, attached laying shaft. In the resulting cavity, the pipeline is stored stress-free in the desired depth. The tensile forces on the wiring harness are permanently monitored and documented by means of a measuring device. Since the soil conditions can never be accurately evaluated and sometimes stony or even rocky sections have to be traversed, it is recommended to set double safety when laying in the ploughing process as well as in horizontal directional drilling. Here, the AGRU Sureline III pipe with protective layer is the optimal solution, because the PE 100-RC media pipe is protected from damage during installation by the additional, scratch-resistant PP protective layer. This ensures a perfect media pipe that can be used without damage to the subsequent operation.

Particular importance was attached to the fittings in this project. Until now, only pipes made of PE 100-RC could be laid without sand-bed, since fittings made of PE 100-RC were not available. This project was different: By providing a complete PE 100-RC system from AGRU Kunststofftechnik consisting of pipes and fittings that were precisely machined to the diameter, the entire pipeline could be installed uniformly and without special treatment of the fittings. 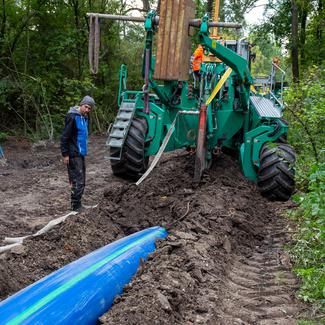 | The welded pull head, machined from a PE 100-RC solid rod, is connected to the plough device. | 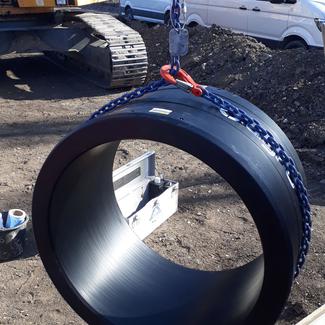 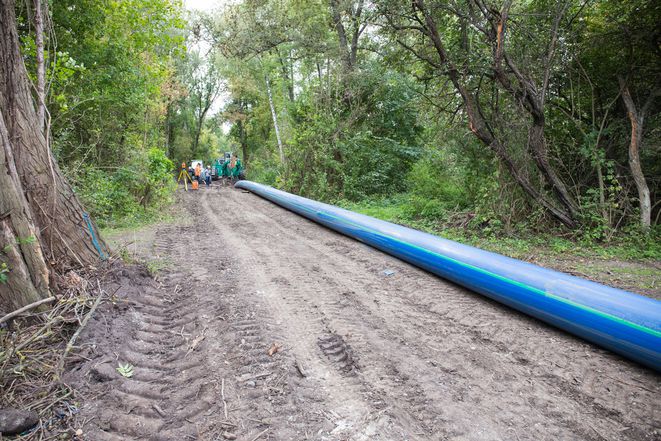 This floor-saving laying technique prevents the compaction of the soil and the mixing of the different sediment layers.

Forward to the Product Catalogue